In 1990, Deborah Tannen wrote the book, You Just Don’t Understand: Women and Men in Conversation, to explain the gender differences in communication styles between men and women. In her observation of young boys, Tannen noticed that they create relationships with each other by doing things together; activities are central to their friendship. Girls, on the other hand, create close relationships with each other by simply talking. For girls, talk is the essence of intimacy.

Men are from Mars and Women are from Venus is a popular book by John Gray published in 1992 that outlines the differences in men and women’s communication. He contended that their styles are so different it is as if they are from different planets.

It is true that, compared to men, women have four times as many neurons connecting the right and the left side of the brain, which appears to create more efficient access to both sides of their brain. Some believe this is why women can often focus on more than one problem at a time while men rely more heavily and more easily on the left side of their brain to solve one problem one step at a time. Not surprisingly, now matter how much they love each other, couples can easily get bogged down in their efforts to communicate, connect and/or problem solve.

Mark Gungor is the originator of the "Laugh Your Way to a Better Marriage" seminar. In the following video clip entitled "Tale of Two Brains", Mark comically explains the gender differences. Watching it with your partner can jumpstart a conversation about your own interaction and may even offer a way forward to better communication.

What Doesn't Kill Us 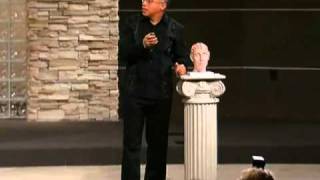 A reflection on grief

What Doesn't Kill Us